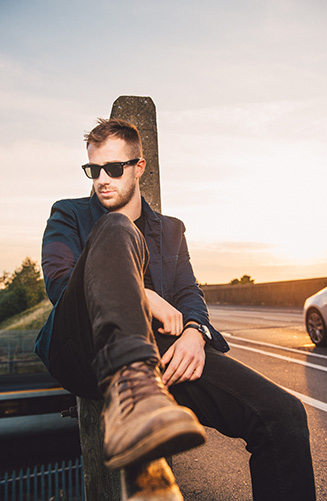 Jack Edwards is a singer, songwriter and proud Yorkshireman.

From a humble town with a rich history and steeped in folklore, Jack’s music is inevitably edged by the world in which he grew up in, many observations and events of daily life appearing in early songs such as ‘Coaltown’:

Itʼs endless conversations down a telephone line
Itʼs remembering where Iʼm from, how we crawled out of the mines.
Thereʼs some wise-guy on the corner trying to hustle me for change
“It comes soon enough,” I said “You donʼt have to wait”.

Jack was primarily a guitar player. Performing on his local gig circuit since the age of fifteen, he stood out from his peers with his love of ‘old’ guitar music from bands/artists such as Thin Lizzy, Clapton, Wishbone Ash and Deep Purple. His Dad was kind enough to take him along to see these bands play (if they were alive and well), and his love for the guitar has never faded since.

Jack completed five years of study at Leeds College Of Music, where he fell in love with the blues and honed his songwriting skills. It was at the college where he met Pete Darling, who along with long time friends Eddie Hill and Adam Swales would complete the Jack Edwards Band line up in the latter half of 2012.

Jack and his new band members recorded the songs that would make the album ‘Never Surrender’ in the Summer of 2012, and it was released in November 2012. Following this, the ‘Death Defying’ EP was released in October 2013. In October 2015, Jack and the band recorded the raw, muscular ‘Love and Luck’ EP, that is definitely Jack’s best musical work to date.

If anything, Jack’s songwriting is honest. He is capable of writing songs that are full of hope, and songs that can cut people to the core. The bands’ live performances are engaging, raw and muscular, drawing new fans wherever they play.